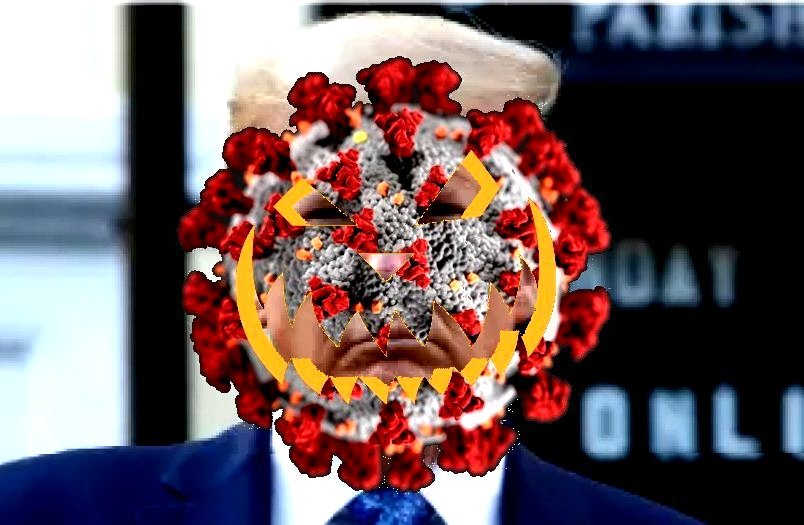 I did not intend to publish another article in this series until after election day … Tuesday, November 3, 2020. I have changed my mind. I cannot let the increasingly outrageous antics of President Trump, Senate Republicans, and the National and State committees of the Republican Party go unchallenged.

This will be one of the most “stream of consciousness” and unpolished articles that I’ve written in a long time. The nonsense is coming in too fast. “Donald and the Trumpists” are so dedicated to winning-at-any-expense that they are pulling out all the lies/myths,[1] dirty tricks, and questionable behaviors they have. Here, in no particular order, are some of their most egregious efforts.

If we don’t know who won by election night, it’s not real.

President Trump wants us to believe that the television networks are in charge of declaring the winners of our elections. Given the seemingly bottomless depths of his ignorance, he may actually believe that they are. It’s on television. It must be true. He probably believes that small green lizards sell insurance and a colonel who is a constituent of Mitch McConnell has a secret recipe for fried chicken.

Each state determines its own deadline for its official count. The first time that the federal government sets a deadline is when the Electors of all the states meet to cast their states’ electoral votes. United States Code, Title 3, Chapter 1, Section 7 (3 U.S.C. 7) states:

The electors of President and Vice President of each State shall meet and give their votes on the first Monday after the second Wednesday in December next following their appointment at such place in each State as the legislature of such State shall direct.

We have to choose between fighting COVID-19 and saving the economy.

This statement represents a false dichotomy. The pandemic and the economy are not separate issues. Whenever a city, a state, or a country has tried to open without proper procedures … physical distancing, masks, quick and effective testing, contact tracing, etc. …, cases have increased dramatically. Within weeks, businesses must close again.

How did we get here? President Trump’s contempt for anybody who didn’t vote for him, his unwillingness to believe that anybody … including medical experts … could know more than “his gut”, and his incompetence as a leader destroyed any chance for a coordinated national effort to fight the virus AND keep the economy[2] from tanking.

President Trump sees anyone who didn’t vote for him as the enemy. If a state’s electoral votes went to Hillary Clinton in 2016, everyone in that state is “the enemy” in his mind. Initially, the virus arrived on the west coast from China and in the Northeast from Italy. The states on the west coast and most of those in the northeast went for Hillary. They are among the hated “blue states”. One of the President’s excuses for leaving the states to fight the virus with little or no help from the federal government was, “It’s a blue state problem. If you take away the blue states, we don’t have a problem.”

These graphs show the number of cases and deaths per million of population for the whole United States, the Red states, and the blue states from April 21st through October 31st.

Joe Biden is going to raise your taxes.

If you are a corporation or earn $400,000 or more each year, Joe Biden has vowed to raise your taxes. If you are among the remaining 99+% of us, your taxes will not increase.

Donald Trump is running the country like he ran his business.

The President is certainly trying to run the country the way he ran his business … mainly because he ran his company like an absolute monarch. His businesses are private companies; not corporations. He doesn’t answer to a board of directors nor to stockholders. If you disagree with him, you’re fired.

Even if running the country like a business were a good idea, Donald Trump cannot do so. As President of the United States, some of his main tools for running a business are not available:

If Joe Biden is elected, Christmas will be cancelled.

This may or may not be true … but, if Christmas is cancelled, it won’t be President-elect Biden who does the cancelling. Christmas is 26 days before Inauguration Day. Donald Trump will be the Grinch.

If Joe Biden becomes President, the United States will become a Socialist country.

First of all, the governments of countries like Cuba, Venezuela, the Soviet Union, and Nazi Germany are/were not socialist. Adding the word “socialist” to the name of your political party/movement or country does not change the reality of a dictatorship or oligarchy.

Secondly, Socialism versus Capitalism exists only in the abstract. Both have advantages and disadvantages. Most of the world’s economies have elements of both.

Thirdly, neither Joe Biden nor Kamala Harris is wedded to the most liberal end of the Democratic Party. I think that President Trump was hoping to run against Bernie Sanders and is too stupid to change his “act”.[3]

Joe Biden wants to take away your health care.

As you watch this video, ask yourself, “Who is addressing the moderator’s questions and who is babbling like a 5 year-old who has been caught with his hand in the cookie jar.

I had hoped to publish this article by Halloween. I didn’t quite make it. I kept the header image because I like it … and, because it so clearly expresses the Trump presidency.

If you have not yet voted, please do so on or before November 3rd.

If you want to beat COVID-19, reboot the economy for all of us, restore decency to our government, start to regain our place on the world stage, and continue our journey toward living by the ideals on which our nation is based, vote for Joe Biden and Kamala Harris.

If you prefer sticking with Donald Trump and Mike Pence, I have only one question for you. “Where are we going and why are we in a hand basket?”

[1]
With President Trump, it’s hard to be sure whether he’s lying, repeating someone else’s lie, delusional, or actually believes what he’s saying. I suspect he’s not the brightest bulb on the Christmas tree. If he were half as smart as he wants us to believe, he wouldn’t be so sensitive about his intelligence. After all, he has demonstrated that he can repeat “Person, Woman, Man, Camera, TV” … not just once, but several times.

[2]
Donald Trump’s idea of “the economy” is limited to the condition of the stock market. If the Dow Jones Industrial Average is rising, the economy must be improving. (How big is your portfolio?) If the economy were improving consistently, he probably would be reelected. We’ve learned that the President knew that the novel coronavirus is extremely contagious and airborne as early as January 28th. He said that he did not tell anyone because he didn’t want to cause panic. Many think he meant that he didn’t want to scare the public. I believe it’s more likely that he wanted to avoid a panic in the market.

[3]
There are times when the President seems to be running against Hillary Clinton or even Barack Obama. Someone should tell him that it’s not 2016, 2012, nor 2008. He wouldn’t listen, of course. I guess his advisors think there’s no point in wasting the time.