Warning: This article contains video links. Depending upon your
network and system, it may load slowly. The Links are
from YouTube. Some will disappear over time.

This is one of my posts that will grow over time. There will be some entries relating to commercials that I consider silly, but most will be annoying, enraging, and downright disturbing. Those who have followed my articles for a while know that I don’t usually suffer fools gladly.

The notation following the title of each entry is the runtime of the commercial using the format (minutes:seconds). I may enter commentary before the video, after the video, or both. Most, if not all, of the videos are links to “YouTube”. As such they will end showing links to several related videos. “Pay no attention to that man behind the curtain.”

The short commercial for the Infiniti Q60 inspired this article. I see it a lot … and want to yell at the TV almost every time. Try to ignore the actor (who plays Jon Snow in Game of Thrones). Listen to the voiceover and think about the literal meaning of the words.

Did you catch it? “A car should only be measured by one thing … how it makes you feel.” Really??? Never mind whether the car is reliable or economical or safe … or a lot of other things intelligent people use when evaluating a purchase as important as a car? If it makes you feel like a prominent character in a TV fantasy show,  buy it. Get one for your teenager too. Nothing else matters.

Yes, I know. You and I and many other people can understand it’s an exaggeration. We understand that commercials are intended to sell things; we know that they play fast and loose with the truth … but, there are a lot of people who might take it literally. There are a lot of people who believe anything they hear. A lot of people like to wallow in their ignorance. Half the people in the country are below average intelligence. (If you’re offended by the preceding sentence, you either don’t understand what the word “half” means … or, you may be a member of the lower half.)

I like almost all of Liberty Mutual’s current series of commercials. A few are just so-so, but this one bothers me.

My first idea in defense of the young lady is that 4 years is a subjectively longer time for her than for me. For example, let’s assume she’s 25 years old. Four years is 16% of her life. It’s only 5% of mine. Remember how long year was when you were a kid … how far apart your birthdays were? Most of us unconsciously judge longer stretches of time in relation to how long we’ve lived.

Let’s do some comparisons:

OK, it might be a percentage of age thing, but I don’t buy it. My “working life” extended from 17th year through my 71st. In those 54 years, I had 10 jobs … an average of 5.4 years per job. Given her current average, the young lady in the commercial will have had 4 jobs by the end of 5.4 years. I’ve averaged about 6.6 years per relationship. I initiated the end of only one of them. I’ve never “totaled” a car.  I’ve messed some up rather badly, but they could all be fixed. I had to leave one when I went to college. One left with my first wife. The rest, I “drove into the ground“. I remember all of those cars … and still mourn a few of them.

Yep, the young lady the commercial is fickle … or, I have values that are decades out of date … or, I’ve been foolishly loyal in world where people and relationships are as fragile and interchangeable as things.

I like most of the Progressive commercials starring Stephanie Courtney as “Flo” … especially those where she plays not only Flo but 5 members of her family as well. On the other hand, the ones starring “The Box” are really annoying.

The Box is narcissistic, arrogant, and a bit of a bully. Some of what he says is pure self-aggrandizement. Maybe he should run for President. 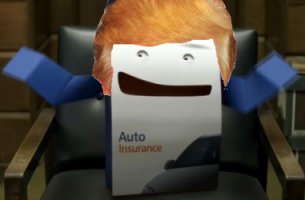 Sometimes, even Flo’s presence isn’t enough to keep a Progressive commercial from being really irritating. Here’s an example. I think the guy at the beginning and end is “The Box” in a human costume.

I think I can safely say that I’m not alone in finding this one to be more than a little creepy. Do you even remember what it’s advertising? I didn’t.

Speaking of creepy … few commercial “spokes-characters” are more creepy than the Burger King. Here are some examples of what I mean:

… and the most disturbing of all Burger King commercials …

I congratulate Mike for being in demand. I condemn the companies for running their respective series in the same span of time. I don’t know about you, but characters in books, TV, movies, etc. take on a sort of reality to me. Seeing the (apparently) same character as both “good guy” and “bad guy” in a number of “30 second stories” across several months was more than a little confusing. (In my area, the USPS commercials started a few weeks before the Comcast commercials. The order may have been reversed for you.)

This commercial “creeps me out“. It starts with the woman saying, “I thought I married an Italian.” Later, she says, “So I went on Ancestry to learn that one of our ancestors was Eastern European.” One of our ancestors? Are they siblings? Is she admitting to incest? This is a careless and gross abuse of language. (I apologize for the poor quality of this clip. It’s the best I could find. It looks like it was shot from a TV with a cellphone.)

While looking for other commercials, I found a number of “Worst Commercials Ever” lists. This one appeared on a lot of those lists. I have to agree that it’s one of the most annoying commercials ever made … especially because the product doesn’t really work.

What did anyone expect? The bone in our foreheads is designed to protect our brains from harm. Of course, something you rub on it is going to go straight through to cure a headache. Yeah, right!

Well … that’s it for now, but I’m sure there will be more to come. Rest assured that the people who write “silly, annoying, enraging, and downright disturbing” commercials aren’t getting any smarter … nor are the people to whom they’re appealing.