I am deeply concerned about our problem with illegal aliens. They are not limited to any one place. Indeed, illegal aliens are seen in every state and territory of our country. This  invasion had been going on for decades … maybe tens of decades … with little or no resistance from anyone … especially our government. It seems likely that our government may, in some way, be complicit in this invasion.

Although problems with illegal aliens were reported earlier, the modern era influx began in the late 1940s. At first, the police and military dealt with the “invasion”. Around this time, President Truman created a commission that has come to be called Majestic 12. Coming from or replacing that group was Project Sign, followed by Project Grudge, followed by Project Blue Book. Many question whether Majestic 12 ever existed. Others question whether it ever ended; suggesting it simply went underground. Projects Sign, Grudge, and Blue Book have well-documented beginning and ending dates.

Projects Sign and Grudge and to a lesser extent Project Blue Book, while ostensibly created to investigate the illegal alien problem, seem to have been more focused on proving that the problem didn’t exist. Why would the government diminish the problem? Perhaps the government believes that complete knowledge of the problem might be too much for the general public. Perhaps we have more to gain through ignoring the illegal aliens than through persecuting them.

In 1958, President Eisenhower created the Advanced Research Projects Agency (ARPA). Later the word “Defense” was added to the beginning to form DARPA. Over the years, DARPA has been associated with secret projects such as stealth aircraft. Testing for some of these secret projects was done at Area 51. United States Army Colonel Philip J. Corso has claimed that some of the technology of our modern era was reverse engineered from technology obtained from illegal aliens. 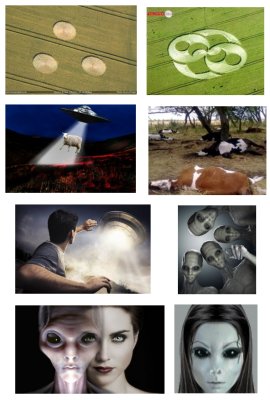 While the government takes offered “gifts” (bribes?) to use for advancing our culture and “looks the other way”, illegal aliens continue their less reputable behavior.

They damage our crops … crushing them to create arcane symbols.

They steal and/or mutilate our animals.

They abduct our citizens for who knows what nefarious or depraved purposes.

They may even be polluting our DNA with their own to create bizarre hybrids.

Those are the questionable activities of the “illegal aliens” that have made it into the domain of public knowledge. Who knows what they … and the government … are keeping secret. 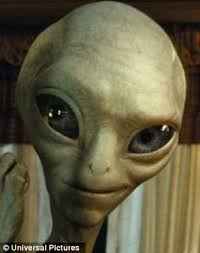 By now, I’m sure you realize that I’ve been talking about these guys rather than illegal immigrants. I wrote this as a companion to my article on Immigration for three reasons … two trivial and one important. I wrote it:

In general, the word “alien” means things and people that are different and strange to us. Since the 1950s, Science Fiction … in books, in movies, in TV shows, in video games, and in comics … has changed the public subconscious. Today, for many of us, the word alien brings up images like these:

Illegal residents may be people that are different and strange to us, but they aren’t aliens in the modern parlance. They are not inhuman. We need to treat them humanely.