Half of the Dozen

Three of those remaining are late entries. Two actually have the kind of wealth that Donald Trump pretends to have. Six qualified for the January 14th debate in Des Moines, Iowa. 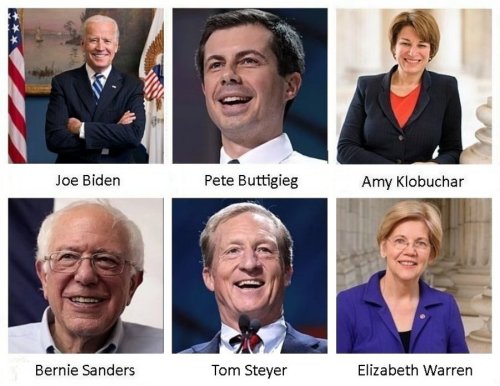 I watched the debate and kept score based on my less than humble opinion. I watched a couple hours of analysis following the debate and kept score based on the opinions of the commentators. I located and merged the results of the latest Iowa and New Hampshire poles. Since May 1, 2019. I’ve been keeping track of all[1] of the Presidential candidates, selecting one at “random”,[2] and giving that candidate one point.[3]

My less than Humble Evaluation

By my tally, the candidates’ performances ranked like this:

Here are charts showing the results of the polls for Iowa and New Hampshire from the week ending on January 25th. [5]

When combined, these polls produced this ranking of the candidates:

The Correspondents and Pundits

I listened to couple of hours of post-debate discussion on MSNBC and, did my best to tabulate the pros and cons expressed by the discussion participants. Sometimes it was a bit hard to follow (as open-ended discussions sometimes are). The resultant ranking was:

Random Fluctuations in the Universe

Two hundred and seventy-two days (as of January 28th) of random selections for President yielded these results:

To Sum It All Up

Adding the scores (not the rankings) across all tabulations produces this ordering:

What Does It All Mean?

What does it all mean?  It means that I’ve presented four “opinions” of the state of the Democrat’s presidential race and an amalgam of all four … that will probably have little correlation  with the results of either the February 3rd Iowa Caucuses or the February 11th New Hampshire Primaries. The real question is: What makes it so difficult to estimate the results of a vote that will be held in less than a week and another vote less than a week after the first one?

I Thought I Made a Mistake Once, … But I was Wrong!

This article is my opinion; not my science. [6]  There are some basic problems that plague predictions based on opinions and the statistics applied to those opinions:

Keeping Score … within the Margin of Error

My less than Humble Evaluation … within the Margin

This distribution has a margin of error of 4.90. Taking that into account, the differences among the candidates narrow to:

“Latest” Iowa and New Hampshire Polls Combined … within the Margin

The sample formed by combining the polls shown above has a 10.34 point margin of error implying that:

The Correspondents and Pundits … within the Margin

This sample has a low margin of error … 2.15 … and, its results are unchanged. Because this is a very small sampling, the tri-modal pattern of results not only overcomes the margin of error; it creates it:

Random Fluctuations in the Universe … within the Margin

You might expect a sample of “random” numbers to have a rather large margin of error. That would be true if the sample were large enough. [8]  This sample is not a large one. My random tallying program covers all of the remaining candidates … both Democrats and Republicans …; not just the 6 who debated in January. Those 6 candidates represent only 44.1% of my random candidate “tracking”.  The margin of error for this sample is only 3.71. When added to the analysis it produces these results:

To Sum It All Up … within the Margin

That’s not very helpful, is it?

Again, What Does It All Mean?

I believe it means that the Democratic Presidential Race is very close …. probably, and not surprisingly, too close to call. It’s just too early. A new poll seems to come out somewhere every day. For the most part, these polls consider only the “January 6”. Although the correspondents and pundits have been expending most of their energy on the Senate Impeachment Trial for the past couple of weeks, we see a similar ebb and flow in their discussions when they do talk about the Presidential Race. Because of the debate access rules of the Democratic National Committee, one prominent candidate, Michael Bloomberg, has not been allowed to debate yet, but is still gaining on the 6 who were in the debate.

Bringing It Into Focus

When will we know who the Democrats will nominate for President? That’s easy. We’ll know for sure sometime between Monday, July 13th and Thursday, July 16th. That’s when the Democrats will hold their National Convention to nominate their candidate. In a bit more than a month, we should see a narrowing of the field of candidates:

By the end of Super Tuesday, we’ll know the preferences of the voters in 18 states. By then, national polls should have fewer candidates and smaller margins of error.

From July 17th through November 3rd

The so-called “only polls that count” in selecting the Democratic nominee … the primaries and caucuses … begin tomorrow. No matter who comes out of the Democratic National Convention must really get to work on Friday, July 17th. Whether by intent, or wanton ignorance, or sheer stupidity, the Trump Administration is attacking the very basis of our country, our freedom, and the rule of law … the Constitution of the United States. All of the Democratic candidates will need to shift their priorities to getting their party’s nominee elected on Tuesday, November 3, 2020. That nominee needs the support … and the vote …of every anti-Trumpist in the nation regardless of party affiliation.